If I create a new song, or work on a new song and write a verse or something, I get a huge amount of satisfaction from that. If I fix something on my car, complete a project at work, or a freelance project, etc. I get a great feeling of accomplishment, satisfaction, etc. out of those things. With those things, there’s ego, money, etc. involved. The value of those things are very easy to recognize.

What’s different now is that I get a similar feeling (not the same, but similar) from taking out the trash, doing laundry, etc. Don’t get me wrong, those things are not enjoyable, and the don’t advance anything… I don’t learn anything, I don’t get any financial reward, it didn’t effect my health, relationships, etc. It’s just things that need be done. But even besides the fact that it’s things that maintain the household, it also make me feel productive. Yes, a day of pure relaxation is nice. I like not having to do anything sometimes. But even those days, there’s a point where I want to do some exercise, play my guitar, take a Spanish lesson, etc. I still want to feel like I accomplished something. You could make the argument that a day of nothing helps recharge you mentally and physically, so that is accomplishing something, and those things are important, but my brain needs activity.

Gained 2 lbs from Thanksgiving meal. Worth it. I can work that off. But, now I have a couple of days worth of leftovers of the same food that put those 2 lbs on. And I'm hungry right now. I know the answer. Keep the turkey, throw out the rolls, yams, mac n cheese, stuffing.

On a brighter note, I ran the North Texas Turkey Trot 5K in Frisco on Thanksgiving morning. It rained the whole time, but thankfully the temperature was not too cold.

I had a great pace (for me) going until just about halfway when I hit a wall. I pretty much coasted the rest of the way. I'm interested to see my official time. I know it won't be great, but I wonder how much the fast first half had on my overall time. A normal 3 mile run for me would be around 34 minutes. I've settled in to a 11 minute mile pace in recent years. 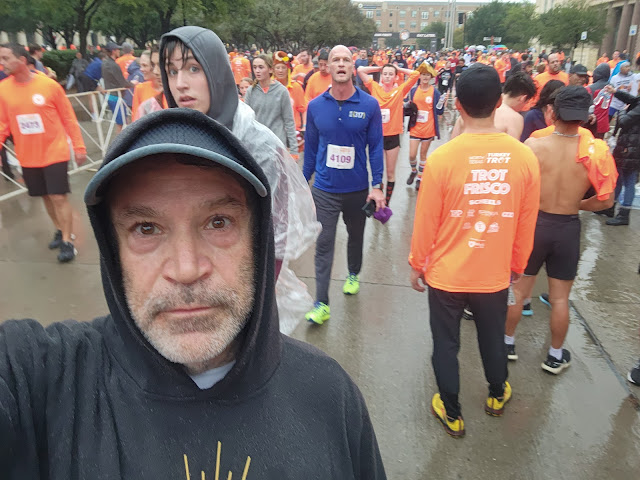 New tune in the works with the CCCT (Chris, Chad, Chad, Troy) gang. Chris came up with a couple of tasty riffs, and I am putting lyrics to them. This is super fun stuff. The creation/collaboration process is magical.

I have so many ideas and songs, and ideas about collaborations with friends, that it's almost overwhelming. I sure like it when it comes to fruition. Well, it's coming to fruition. I hope it gets there.

I want to complete a new song with Damaged Faith.

I want to record songs and/or a solo album with my musician friends (Doug, Harbour, Chad, Neil, Mike, etc. etc.).

I want to record another 49th Vibration album.

417 days of learning Spanish with Duolingo.

Man, Duolingo says I know 1,460 words. I feel like I know about 100, but half of those I can't seem to recognize when they fly out of a Spanish speaker's mouth.

Now, let me try saying all that in Spanish. I don't know how to say "fly out" and I guessed at "recognize/recognocer" and "speaker/hablador".

So here's what Google Translate says, that I just said:

Wow, way better than I thought. I said "mieda" instead of "media", but that was a typo, as I do know the word "media/half". Of course, if I ever forget that word I think of Rebecca and Jose Mediaceja. Wrong verb conjugation for "siente". Should have been "siento", and should have been "me siento". I know those things, but I tried not to thing too long and just go with what came to mind.

That statement might come through to a Spanish speaker as a mangled mess, but I think they would know what I was trying to say....maybe. "I'm afraid of those I can't recognize..." would be very confusing. lol.

Growing up in south Louisiana we ate Cracklins all the time. They are like pork skins/rinds but with some meat and fat on the skin. Mexico has something very similar called Chicharrones. These come in different forms. I've seen them in the grocery store where they are similar to pork skins, which is just the fried skin. Those are good, like most pork skins. But I recently found the ones that are more similar to cracklins. They have the meat and fat on them. I found a place close by my house called La Super and they have them, so I am set. I even was able to practice a little Spanish when ordering. 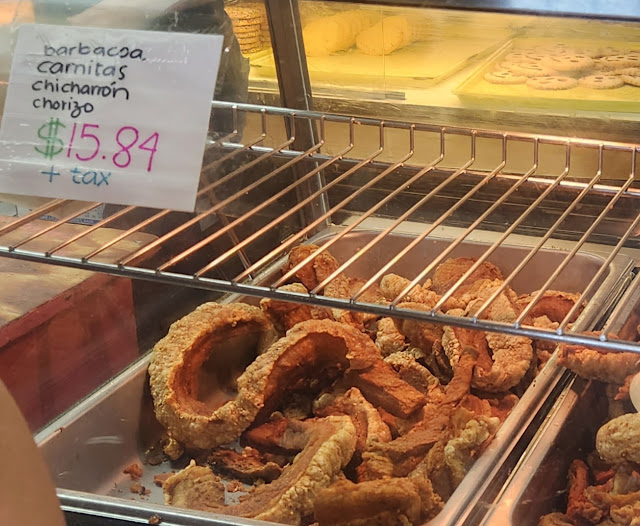 The Cleverly's at Billy Bobs

We went see the Cleverly's at Billy Bob's in Ft Worth. Great show and fun place. We stayed the night and enjoyed the Stockyards the next day. It had been probably over 10 years since I had been there. It's as massive and country as I remember. We had a great night.

The band was entertaining. Their schtick is hilarious, but don't think these guys are not legit musicians. They are the real deal. 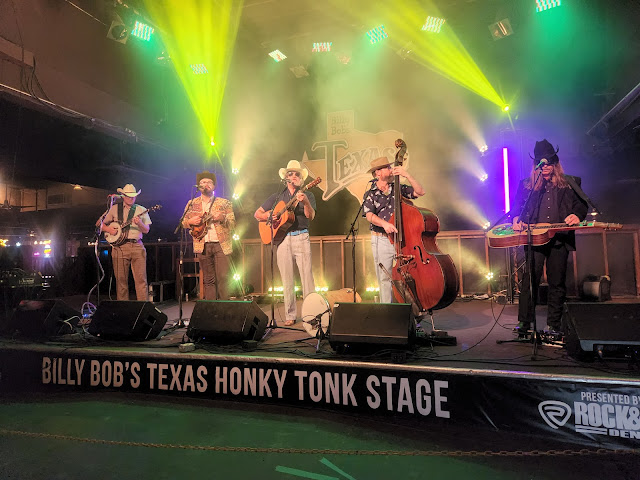 We had some great Mexican food at Esperanza's the next day.

I went fishing at Lake Lewisville. I went to Ridgepointe Park, which is on the south east corner of the lake. This is the stop I have fished lately. I walk along the shore to little point. The water is shallow, so I walk a little ways out to about waist deep water and either throw out my catfish lines or throw out a lure.

I've caught largemouth and sand bass there, but not much catfish. This time, I caught some live shad in my cast net and set out two lines off of the point. I fished on the bottom with double drops on each pole.

I got my lines in the water around 11:15 am. I caught a small, but keeper size blue catfish. I put in on a stringer, as I considered taking some home if I caught enough. There is no minimum legal size, but it was around 14 inches and a good eating size.

I little after 12 am I caught my second one, which was a really nice size Blue. It was well over 12 inches long. 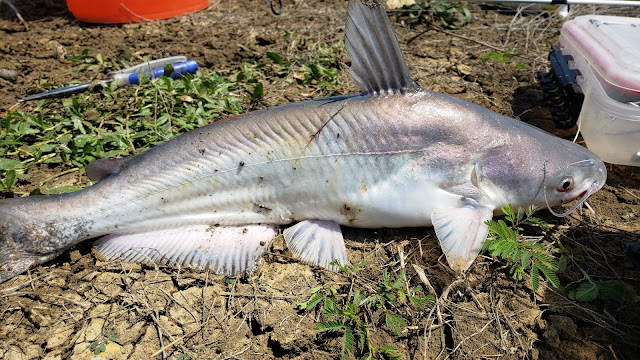 Around 12:30 I caught my third fish, which was bigger than the first one, but not as big as the second.  This one was a Channel Cat I believe. 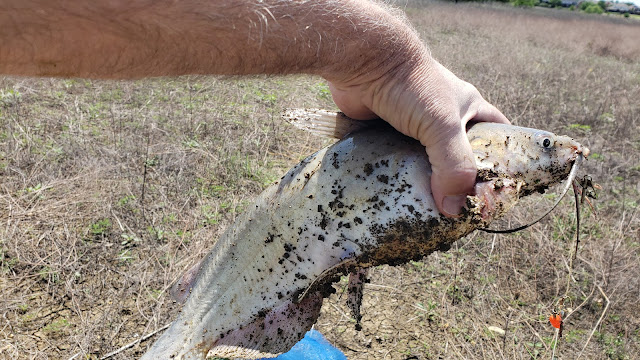 Five minutes later I caught my fourth fish I caught was a freshwater drum. It was probably a foot long, and I was not oppose to eating that, so I put it on the stringer as well. 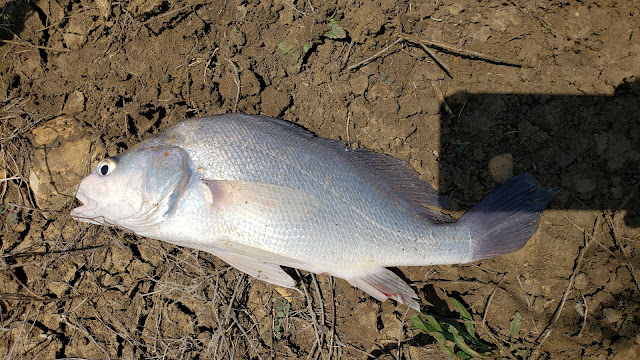 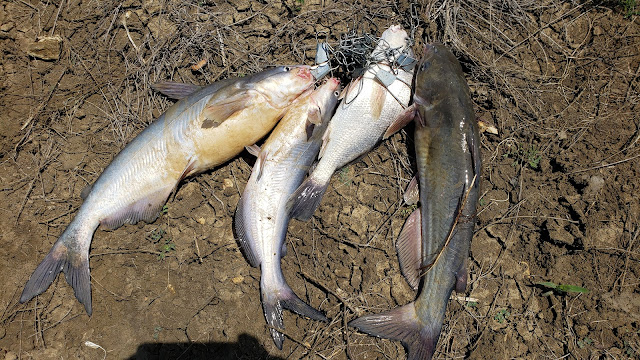 The stringer was looking really nice at this point. I felt like I had to make decision whether I was going to take these home. It was a commitment to clean and process these fish, and this was more than I was going to eat in one meal, so I would have pack some away and freeze them. Not a huge deal, but that decision would decide how I would spend the rest of my day once I got home. I decided to let them go, and keep on fishing.
Around 1:39 pm I caught my fifth fish, which another really nice Channel Cat. It was a good 20 inches long. In the image below, the tackle box is around 16 inches wide. 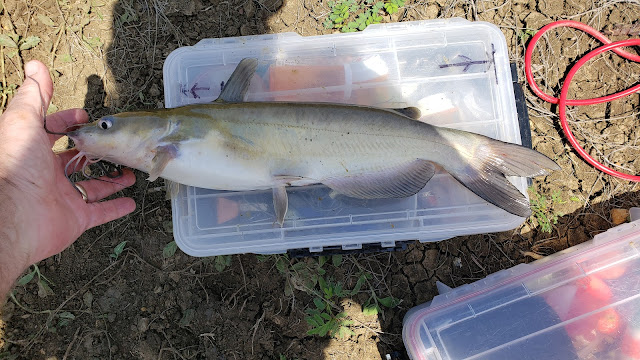 Not five minutes later I caught number size which was another Channel Cat which a little bit bigger and fatter than the previous one. 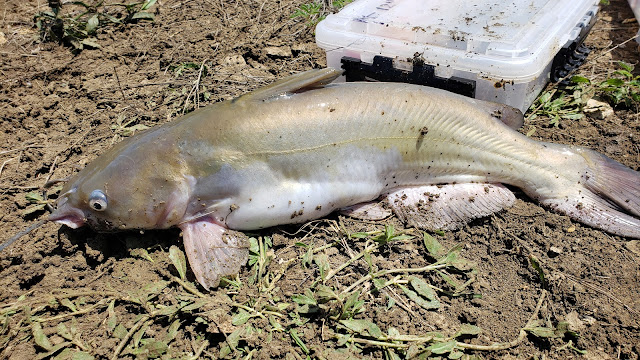 Right at 2 pm I caught number seven, which was another really good fish. This one was a Blue. 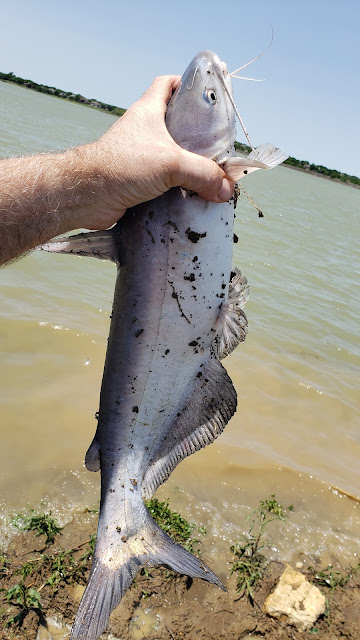 Right before I caught my last fish I noticed a few guys fishing a little ways down the shore. I would walk right by them on my way out, so I purposely kept the last fish I caught and would offer it to them, if they wanted it.

Before I packed up, one of the guys came over and asked me if I had a lighter. I didn't. I talked him a little about what I was catching and fishing with, and what they were fishing with. He spoke Spanish, so I tried to speak a little Spanish to him. I didn't know many fishing terms in Spanish.

As I was leaving I talked to him and his buddies for a few minutes. They has set up camp and had a BBQ pit ready to go. They had shrimp and crawfish for bait.

I asked them, as I have aske a few other Spanish-speaking people, how to say "crawfish" in Spanish. They just called the crawfish "camarones", which is the same word for shrimp.

If I type "crawfish" into Google translate, it says "cangrejo de río", but no Spanish-speaking person I have said that term to was familiar with it, and these guys were not as well.

I told them "bien suerte" and called it a day.

Fishing
Sat 4-2-2022
Fishing at Lake Lewisville
I only caught a couple, but it was sure fun, and was a beautiful day. As a rebellious young man, I questioned many established things... religion, government, etc. etc., but I didn't think I would ever NEED to question doctors, scientist, and other professionals that I thought exclusively worked in the realm of facts. I can give you example after example of supposedly knowledge holders (experts) disagreeing on some very important things that have, or will have huge impacts on our lives.

Inferred Evidence
We don't know everything. We use what we do know along with reason, logic, predictive models, etc. to arrive at conclusions. Those conclusions, though fact-based, are not proven facts. They might be true. We might one day know that they are, but until then, they are an educated guesses.

Climate change, Covid, carbohydrates, etc. is all up for grabs.

Some doctors says Ivermectin is dangerous and there is no proof it helps treat Covid. Other doctors, citing studies, say exactly the opposite.

Some climatologists say that climate change is an existential threat to the planet, and other climatologist say the small amount of warming is very manageable, and in many ways is beneficial to the humans and the planet.

Some doctors say the Keto diet is unhealthy and leads to high cholesterol, liver damage, heart disease, etc., while other doctors say that a high carbohydrate diets leads to those same problems, and a high protein, high fat, low carb diet reduces cholesterol levels in the blood.

I try to not always have a "follow the money" mentality. Everyone is getting paid to do their jobs. There's nothing wrong with that, and just because you get paid by an organization that shares your opinions/conclusions, that does not make everything they say biased. But, it does make you wonder, and no one is above reproach.

Trust the experts? Which ones?

The emotional rollercoaster that is Duolingo

You ever have one of those Duo days where with the combination of just plain guessing, brain farts, typos, etc. you run out of hearts before you get through even one lesson? This was today, so far.

The day before was great. I had 200+ XPs. I completed enough lessons where the next checkpoint became available "checkpoint 2". I had watched a few Youtube videos by "Spring Spanish" that gave me some interesting insights into how native speakers handle some common questions/responses. It was an encouraging day, and felt like I made some progress. But today, not so much.